I never remember where I have been. The first time I went to Europe, I was 15. I do not know exactly where I stayed. It was an hour train ride, maybe two hour train ride away from Paris. My sense is it was south or east but not north or west. It is like I was kidnapped and now trying to reconstruct where I could have possibly been taken. It was a tiny old medieval town. I do not remember its name. My hosts took me to some Roman ruins nearby. I took a million pictures with my disposable cameras. When I returned home, I was totally unable to recall details of the pictures I had taken or share the story with my family.

Now we are in the age of the internet and I can use Google to piece together my past travels. This image was taken in 2009 on a trip to Palm Springs, California. I reproduce it below with two different effects. The photograph was taken by me from the passenger seat of our rental car. I was struck by the dark California skies. A storm was coming. The sky is different everywhere. I love Texas skies best, but these stormy skies felt all encompassing. Texas skies are so bright blue and the clouds float so high. You feel like you are in a cathedral with very high ceilings. These Palm Desert skies felt electric and crackling.

We were driving through the San Gorgonio Wind Park, the largest wind farm in the United States. These are not windmills but wind turbines. There are 2700 of them. The oldest ones were built in the 1980’s and stand at 65 feet high with 15 foot blades. This photograph is of the newer models which stand 229 feet high with 140 foot blades. It was a surreal experience. The towering wind turbines felt alive, like sentient beings, in the midst of a battle against nature or against time. 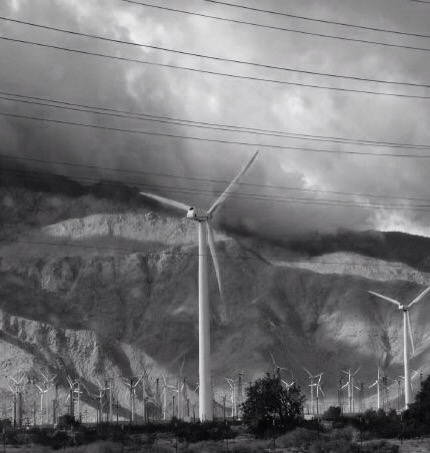 One reply on “Massive Wind Turbines”

Usually I like color photos, but in this case there’s something that draws me to you black and white version. There’s an interesting juxtaposition of man and nature in your photo. I bet that was an impressive sight.

Thanks for liking my blog post on photography 101. Have a great day!